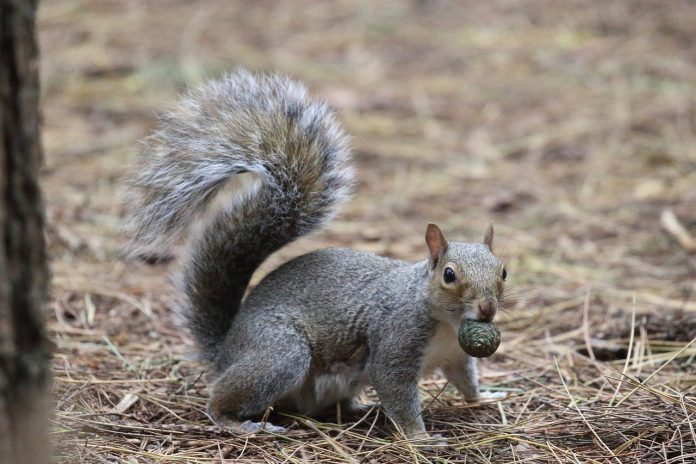 My walking sidekick is my old German shorthaired pointer named Remington. The irony in her name is that she is gun-shy.

We adopted her when she was fully grown and discovered her insecurities pretty quickly. She is guarded around strangers and leery of guns, but her favorite thing to do is go on walks and lock into a point when she sees a bird.

Lately, however, she has a new hobby: She guards our yard against pesky squirrels. She watches for them like a cavalryman entering a clearing; she scans the yard for any rodent enemies.

This year, there seems to be more squirrel activity in the perimeter of our front yard than in years past. The squirrels are working hard to store copious amounts of acorns for winter.

After inspecting our oak trees, I noticed many more bunches of acorns clustered on the branches than normal. Old wives’ tales would lead me to believe that these are both signs of a lot of snowfall during the next winter.

A larger than normal amount of acorns and increased squirrel activity are just two examples of many non-scientific predictors of winter weather. I also know to watch for the color of woolly bear caterpillars. The problem is that I can never remember which color means more snowfall, rust or black.

After more discussion than necessary among my family members, I confirmed on Google that it is indeed the black band that predicts winter weather. A longer band of black, according to old wives and grandpas everywhere, means a severe winter with large amounts of snow and cold temperatures.

The Old Farmers’ Almanac has released its prediction for the winter of 2021-2022, and it does confirm what the old wives’ tales are telling me. Ohio is predicted to have a cold and snowy winter this year.

Winter weather predictions are an example of when folklore and science clash. Woolly bear caterpillars do have 13 body segments, which some say correspond with 13 weeks of winter.

However, the myth is debunked by scientists who say the band width and color are a result of the growing season, age and how long the caterpillar has been feeding.

The coloration is also different among different species. The adult form of a woolly bear caterpillar is a tiger moth. There are over 260 species of tiger moths in North America, each with slightly different colorations.

Scientists also emphasize that a surplus of acorns does not predict a harsh winter. There are roughly 90 species of oak trees in North America. Oak trees have irregular cycles of acorn production.

Some years it is lean, and then every 2-5 years there is a boom in production referred to as “mast year.” In a high-yield mast year, a large oak tree can drop 10,000 acorns. During a mast year, food is more easily available for forest foragers, and their populations increase.

That is not to say that deer never eat acorns from the red oak family. They will eat them later in the year when they do not have white oak acorns to eat. Red oak acorns remain edible on the ground longer than white oak acorns.

Raw acorns are not edible for cattle, horses, or dogs. The tannins they contain can be toxic to humans too.

With the proper preparation, acorns are made edible for human consumption. After shelling the nut, it has to be leached in cold or hot water depending on its future use.

Many people eat the roasted nut as a snack or grind it into flour. Acorn coffee is another warm woodland treat.

Remington and I won’t be stealing any acorns from the squirrels and deer, but we can learn a lesson from the wildlife.

This winter might be harsh, and we need to be prepared. While some folklore is proven false by scientists, many old adages remain true.

Like the quote says, “If you fail to plan, you are planning to fail!”

With inflation and an unpredictable economy, we need to prepare for the worst and hope for the best.