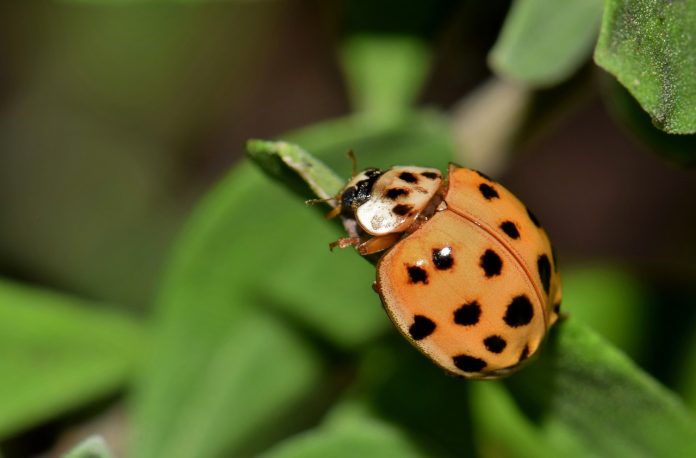 Sure, finding Asian Lady Beetles in your garden is good luck, but in your house?

Suddenly, lady beetles seem slightly less attractive when they are crawling up your laundry room wall and falling from the ceiling. I’m a fan of nature, but I’m also a fan of clean. Something about sharing space with any kind of beetle — lady or not — seems grubby.

I don’t know about you, but whenever I encounter a bug — a single bug — in my house, I have this irrational fear that hundreds will start crawling out of the walls. Before I know it, I’ll be overrun.

Fortunately, I missed the perennial stink bug infestation. However, missing out on stink bugs must be an open invitation for Asian Lady Beetles.

Incidentally, it’s not the worst thing that could have happened. During hibernation, lady beetles don’t feed and can’t reproduce. They are not multiplying before my eyes. However, like stink bugs, lady beetles like to rest for the winter in groups.

When it comes to lady beetles, once you’ve seen one there are probably more. On the bright side, they won’t damage your home or get into your food. They are not poisonous or carriers of human disease. They will not reproduce or lay eggs indoors. Hopefully, they will leave you alone after they emerge in the spring.

On the downside, once they are in your house you’ll have to share your space throughout the fall, during winter warm-ups and into the spring before they make their exit.

Like any other pest, lady beetles have preferences when choosing a place to invade.  Here are some factors that may make your home more attractive:

The best way to keep Asian Lady Beetles out of your house is by preventing them from finding a way inside. Once they’ve nestled into a nice cozy hibernation spot, it’s hard to force them out.

Lady beetles will begin seeking shelter when outside temperatures fall in September and October. They will find their way into tight cracks and crevices, such as under siding, in wall voids or clustered tightly in the corners of attics and garages. From there, they’ll try to make their way into your home by squeezing through small cracks in window sills, door jams or foundations. Once they are settled inside, they will hibernate as long as it remains cold outside — and I think that’s key.

When temperatures warm up, like they did last week or on an unusually warm winter day or early in the spring, the beetles will emerge. Then they will become a nuisance. Conveniently, they are attracted to living areas where temperatures are moderate, so you’ll know when they’re awake.

Imagine my surprise when I discovered about 30 lady beetles huddled in the corner of my laundry room last weekend after no signs prior to the sighting. It wasn’t that they weren’t there all the time, they simply found a way indoors and concentrated there.

Too little too late

There’s really only one option once you’re supporting a colony of lady beetles — vacuuming. The best thing you can do is vacuum them up as you see them. Just be sure to get rid of the vacuum bag, or place a rag between the hose and dust collection bag to trap them and release them outside.

You may also try to use traps inside your home to remove lady beetles. One available trap you can try is a cardboard box with a sticky inner lining; however, there is no evidence lady beetles are attracted to it beyond accidentally flying into it and becoming trapped. The second option is a black light trap; however, these are only effective at night when the rest of the room is dark.

Attempting to kill lady beetles isn’t recommended because they benefit agriculture and horticulture by controlling aphid and scale infestations. Plus, when they are bothered, they can secrete an unpleasant odor and a yellowish fluid that can stain curtains and clothing.

Using insecticides inside is also a bad idea for a few reasons. First, it’s relatively ineffective, as any beetles hidden out of the foggers reach will survive. And it’s a bad idea to kill beetles you can’t see to clean up. because it’s possible another pest will begin to feed on the corpses. Lastly, pesticides are poisonous and using them inside for any reason is a risk.

When it comes to Asian Lady Beetles, like so many other things, an ounce of prevention is worth a pound of cure. The best way to prevent beetles from getting indoors is to make sure they can’t get indoors.

Sealing entry points. Sealing cracks and openings is the best way to prevent lady beetles from entering your home. The perfect time to take this preventative measure is in late spring or summer before adults begin searching for overwintering sites. Make sure to seal cracks around windows, doors, soffits, fascia boards, utility pipes and wires. It’s also a good idea to repair any damaged window screens and install screening behind attic vents.

Exterior barrier treatment. If lady beetles are a yearly problem, you may want to consider using pesticides outdoors as a perimeter treatment during late fall. Some examples of effective insecticides you can find at your local hardware store include those containing bifenthrin, cyfluthrin, cypermethrin, deltamethrin and permethrin. Double-check to make sure the product you’ve selected is labeled for exterior use and apply it around doors, windows, rooflines and around your foundation. Pay particular attention to the south and west sides of your house where the insects prefer to congregate.