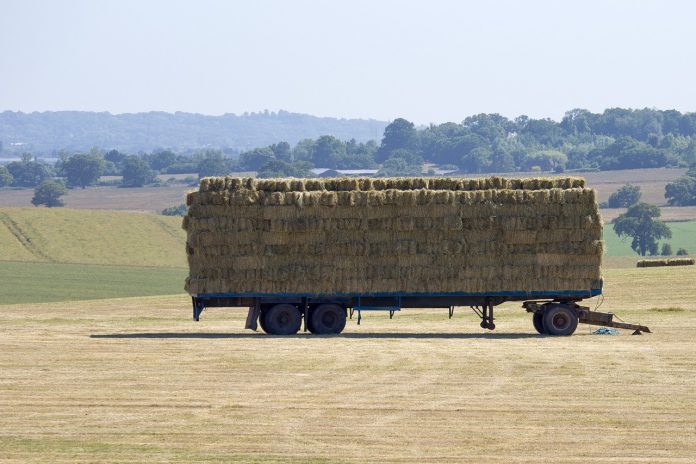 Most hay fires occur within the first six weeks after baling. Moisture content is the main factor that causes hay and straw to spontaneously combust.

Hay fires are more common than straw fires because of the type of forage, the moisture content in the stored forage, and heat production.

1What causes the fire?
After forages are cut, respiration of plant fibers (burning of plant sugars to produce energy) continues in plant cells, causing the release of a small amount of heat. When forages are cut, field dried and baled at the recommended moisture level — 20 percent or less — plant cell respiration slows naturally.Forages baled at moisture levels greater than 20 percent provide the right environment for mesophilic (warm temperature) bacteria to grow and multiply, releasing heat within the bale and causing the internal temperature to rise between 130 F and 140 F.

Forages baled at moisture levels greater than 20 percent provide the right environment for mesophilic (warm temperature) bacteria to grow and multiply, releasing heat within the bale and causing the internal temperature to rise between 130 F and 140 F. The respiratory heat created by the mesophilic bacteria provides a breeding ground for

The respiratory heat created by the mesophilic bacteria provides a breeding ground for thermophilic (heat-loving) bacteria. Basically, the higher the moisture content, the longer a bale will remain at a higher temperature.

Fire risk is greater for hay than straw because a hay bale’s interior temperature does not cool after the first initial heating cycle.

2Decreasing fire risk
The best way to reduce the risk of a hay fire is to bale hay at a moisture content of 20 percent or less.

Haymaking conditions: Recommended weather conditions are a slight wind and humidity level of 50 percent or less. Hay has a higher moisture content in the morning, so consider baling later in the day.

The recommended practice is to mow hay in the morning and allow to dry for a minimum of one full day prior to baling.

Hay preservatives: Hay preservatives, such as liquid propionic acid, applied to the hay during baling inhibit or reduce the growth of bacteria in hay with a high moisture content.

Storage: Store hay in a barn or storage area that is weathertight and has proper drainage to prevent water from entering the structure. When storing outdoors, keep hay covered with plastic or other waterproof materials.

If unable to cover, arrange bales so air can circulate between them to promote drying. Store bales on gravel, pallets, poles or tires to protect from ground moisture.

3Monitoring hay
If you are concerned the moisture content of the hay was too high when baled, monitor the internal bale temperature twice daily for the first six weeks. You can do this with a commercial thermometer, but make sure it reaches the interior zone of the bale.

Next week: Farm and Dairy will provide additional tips on what to do when a bale fire occurs.