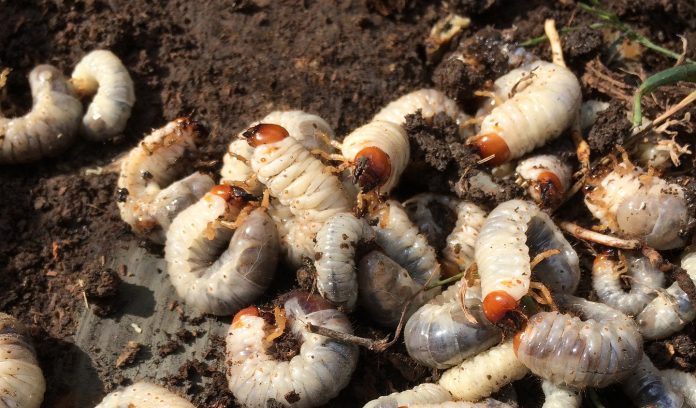 There’s no doubt the nice weather has everyone excited about cleaning up their yards and mowing their lawns. However, that excitement can quickly turn to dismay as brown patches of dead and dying turf begin to speckle the landscape. It’s probably not the scene you envisioned.

So what’s causing it and how can you get it to stop?

More than likely, you’re noticing a white grub infestation. During April and May, grubs, otherwise known as the larval stage of beetles, are large and difficult to control. They are ravenous as they prepare for the next stage in their life cycle — the pupae stage. They are consuming turf roots in bulk, very quickly, creating dead patches of lawn.

Before you treat your lawn for grubs, it’s probably a good idea to confirm they are to blame. The presence of skunks, crows and moles feeding on turf are one good indicator. Dead and dying patches of grass or soggy patches that can be peeled back are also signs of grub infestation. However, surveying and mapping the affected area of your lawn is the only way to be sure. Follow these steps:

Getting rid of your grub infestation

Once you’ve confirmed grubs are causing the brown patches in your lawn, you can determine the best control method to get rid of them. Choosing a method that will work is completely dependent on the time of year and the stage the grubs are at in their life cycle. During the spring, when they are have reached the end of their larval stage, they are the most difficult to control. Fortunately, they will change into pupae towards the end of May and into beetles two weeks later — good news for your lawn, bad news for your trees and garden. Although adult beetles may not be the silver lining you were hoping for, the next stage in their life cycle is the easiest to manage.

In July, female beetles will burrow about 3 inches underground and lay 40 to 60 eggs. These eggs will hatch about two weeks later and a new generation of grubs will begin to feed on your lawn. The key to effective grub management is to coordinate your attack with the stage the pest is at in its lifecycle.

Keep your lawn dry. Once the grubs turn to pupae in May and your grass starts to recover, your first instinct will likely be to nourish it back to health by fertilizing and watering it regularly. These practices are fine until July when adult beetles are laying eggs. Allowing your lawn to be dry may also force the eggs to dry up and die.

Preventative chemicals. Preventative grub treatments work best if they are applied before grub eggs hatch. before you purchase a product be sure to read the label completely to determine the optimum time to treat your lawn. Penn State Extension recommends using insecticides containing the active ingredient chlorantraniliprole or the active ingredient imidacloprid to maximize effectiveness. However, you should note imidacloprid is in the chemical class called the “neonicitinoids” and has come under recent scrutiny due to its negative impact on pollinators.

Curative chemicals. Curative chemical applications will be most effective when they are applied during the summer when grubs are small and actively feeding near the surface of your lawn. The optimum time to apply these chemicals can vary by several weeks but can be more exactly determined based on grub species and weather conditions/soil temperatures in a given year. Following application, all products should be irrigated according to label instructions. Penn State Extension recommends using insecticides with the active ingredient trichlorfon to maximize effectiveness.

Nematodes. Nematodes are microscopic, unsegmented worms that will attack and parasitize insect larvae. Two major species are used to combat white grub species, Steinernema spp. and Heterorhabditis spp.; however, the latter works best. Nematodes require adequate soil moisture and avoiding peak sunlight hours to survive. Therefore, they should be applied at dusk and may require irrigation immediately after application. They don’t have a long shelf life, so make sure to check the expiration date on the nematode packaging before application. Lastly, some pesticides can negatively impact nematodes, so avoiding pesticide application prior to and after applying nematodes is a good idea.

You can also keep grub populations in check by managing adult beetle populations. Check out “How to control Japanese beetles” for more information.