People have been carving pumpkins for centuries. The origins of the “Jack-o’-lantern” are traced back to Ireland, and many people still carry the tradition today. And Halloween was originally a Celtic celebration that eventually evolved into the secular tradition that we recognize.

Halloween has been named National Carve a Pumpkin Day, so why not join in the fun?
Carving a Jack-o’-lantern isn’t your only option for decorating a pumpkin. Carefully carved pumpkins, painted pumpkins and even drilled designs are popular choices and can be done by novices and seasoned carvers alike.

If you want to create a traditional Jack-o-lantern, you can sketch a freehand face on the pumpkin or choose from a cache of free downloads found on the Internet. 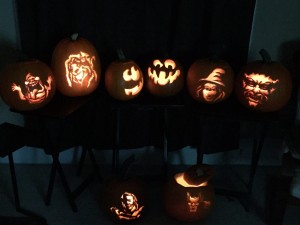 Pumpkin Pile has traditional stencils for carving a pumpkin, plus other stencils from sports and video games to cartoons and animals. The Pumpkin Lady has various free designs to choose from, as well as some that cost 98 cents.

Shallow patterns are a popular way to carve pumpkins this year, like this one from Craftsy. The key is to not cut all the way through the pumpkin. A sharp knife is all you need for this type of carving, but a linoleum cutter could also be used.

Instead of hollowing out a pumpkin and spending tedious minutes or even hours carving an intricate design, why not just paint a pumpkin?

There isn’t much to it. Just choose a paint (matte works well) and paint your pumpkin’s surface. If you’re feeling artsy, you can use more than one color and create a pattern.

To create a Jack-o’-Lantern face, mark off the mouth, nose, eyes and other features with masking tape before you paint your design all the way around your pumpkin.

To drill a design in a pumpkin, Draw your design on the pumpkin’s skin, or use a stencil. Using a power drill, bore the design into your pumpkin. Here’s an example from Crafty Nest.

Now you can cut a circular hole in the top like you would for a standard Jack-o’-lantern, then scoop out the pulp and seeds. Save the seeds for this cracked pepper and sea salt roasted pumpkin seeds recipe, or try these sugar and spice pumpkin seeds.

Have you ever thought of using needle and yarn on a pumpkin? You can use either a real or artificial pumpkin for this project, and the result is impressive.

If you’re using an artificial pumpkin, cut the bottom of the pumpkin open so you can comfortably fit your hand through to cross stitch, according to Country Living. Find a cross-stitch pattern you like, print it out, tape it onto the pumpkin and make holes in each place where you’ll pull yarn through. Remove the pattern guide then complete the pattern.

If you’re using a real pumpkin, cut the top out of the pumpkin like you would for carving. Design Sponge details the rest of the process here.

To keep your newly-decorated pumpkin looking its best, spray it with a solution made out of one part bleach per quart of water. You can also put petroleum jelly on the inside and cut areas of your pumpkin to prevent it from drying out. Or, try Pumpkin Fresh, a solution that’s made designed to preserve carved pumpkins.

Something to try next year

Thinking ahead to next year’s pumpkins? An organic farmer from California has dreamed up “Pumpkinsteins” — pumpkins grown in molds that end up shaped like Frankenstein heads. CNBC shares that even the mistakes, like pumpkins that don’t grow correctly in molds or even pumpkins that explode, can be turned into profit.

What’s your favorite way to decorate a pumpkin for Halloween?