Cooler fall temperatures, shorter days and longer nights stall tomato ripening. Right now my tomato plants hang heavy with green fruit. Each day I check for signs of ripening, but see no pink progress. November is just around the corner and the almanac warns of impending frost. It’s time to harvest those tomato hold-outs and ripen indoors.

It ain’t easy being green

If you’ve ever tried to ripen tomatoes indoors, you’ve probably noticed that a few stubborn tomatoes refuse to turn. Dark green tomatoes that are small and very hard are immature green tomatoes. They never reach their full potential; time only turns them dull and tasteless.

To ensure tomatoes reach green maturity, wait as long as possible to harvest before first frost.

How to ripen green tomatoes indoors 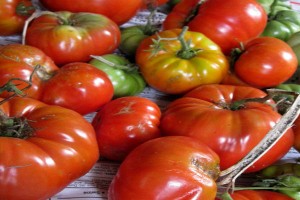 Step 3: Store the box at 70-80 degrees Fahrenheit to ripen tomatoes in about two weeks. Adding bananas to the box will turn your tomatoes red quicker because the natural ethylene in bananas speeds up the ripening process.

If you want to ripen small lots of tomatoes over time, prepare three boxes as described above. Keep one box at 70-80 degrees Fahrenheit, the second at 60-70 degrees, and the third at 50-60 degrees. Move the boxes to warmer temperatures in succession to steadily ripen your tomatoes. I was able to eat garden fresh tomatoes in January using this method!