Over the past year and a half, poison hemlock has been garnering a lot of attention from news outlets, blogs and newsletters as a poisonous plant for livestock (and humans).

But poison hemlock is not the only plant that you should be on the lookout for. There are other potentially poisonous or toxic plants to livestock you should recognize.

This article will focus on three toxic plants which livestock may encounter while grazing pastures in Ohio.

Jimsonweed is toxic to all classes of livestock and humans, but most poisoning cases involve cattle. Poisoning by this plant is quite uncommon because it is unpalatable.

Poisoning cases usually occur in summer or autumn when little, if any, forage is available for consumption. All parts of the plant are poisonous, especially the seeds.

Jimsonweed is a large, summer annual growing three to five feet high with white or purplish funnel-shaped flowers. The stems are smooth and are either green or purple. The leaves are alternate, large, and the margins resemble oak leaf margins (coarsely and unevenly toothed).

The plant’s fruit is egg-shaped, green when immature and brown when mature, and covered with stiff prickles. 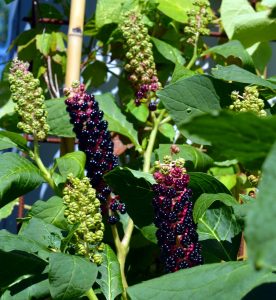 Other common names include pokeberry, Virginia poke, inkberry and pigeonberry.

Pokeweed is toxic to all classes of livestock and humans. Cattle and occasionally horses are poisoned, but poisoning is quite rare.

All parts of this plant are poisonous, especially the roots. The symptoms of poisoning in livestock include severe diarrhea (often bloody and most common), vomiting, convulsions, and death (rare).

Pokeweed is a large branched herbaceous perennial that can reach heights of 10 feet. Pokeweed seeds can remain viable in the soil for up to 40 years.

Mature stems are smooth, branched, erect, and reddish in color. The grape-like clusters of dark purple berries are one of the most identifiable features.

The small berries are green when immature and turn to a dark purple at maturity with each fruit containing around 10 seeds. 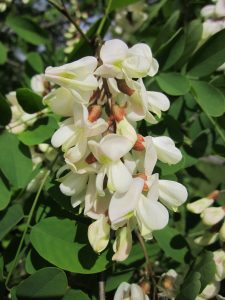 Other common names include false acacia and locust tree.

Black Locust is toxic to all classes of livestock. The leaves, especially wilted leaves, young shoots, pods, seeds and inner bark are toxic.

Most poisoning incidents involve horses chewing the bark of the tree. Cows, chickens, and sheep have also been reportedly poisoned.

The fruit is a flat brown, four-inch pod that contains kidney-shaped beans. Reproduction is either by seeds and/or shoots that sprout from roots of established plants.

Poisoning cases in livestock mostly occur when forage in the pasture is critically low and when cut for hay or silage.

The solution to controlling poisonings from these plants can be quite simple. Always have plenty of feed and forage available for livestock so they are not forced to consume less-desirable plants, and scout fields before making hay or silage.

If poisoning is suspected, you should call a veterinarian immediately, then scout the area for poisonous plants. If any poisonous plants are found, all livestock should be removed from the area.

Finally, eradicate poisonous plants by mowing or by applying the right herbicide based on the plant species. If using herbicides, be sure to follow the label and pay careful attention to the “Grazing Restrictions” section.

The following websites will help you identify poisonous plants.