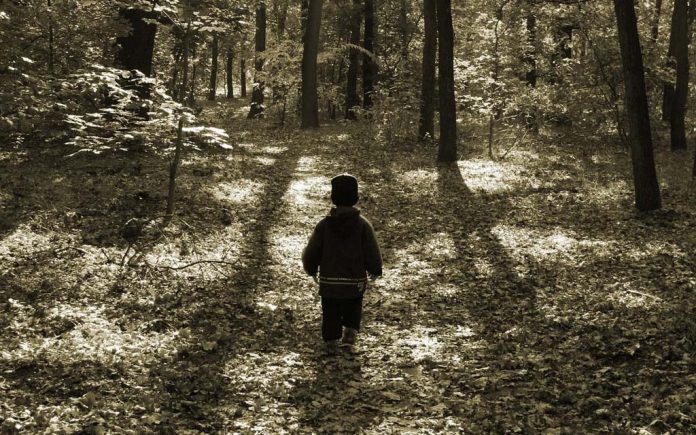 “It is not so much for its beauty that the forest makes a claim upon men’s hearts, as for that subtle something, that quality of air, that emanation from old trees, that so wonderfully changes and renews a weary spirit.”

So many hours of childhood were spent in the woods behind our old farm house, playing, imagining, and curiously studying such things as trees, leaves, bugs and weeds. We were pondering and grasping great knowledge of things we didn’t even realize, putting us ahead of life’s curve in many interesting ways.

My hubby tells great stories of hours spent stomping across fields and into deep woods with brothers and cousins. From a very early age, he was allowed to carry a .410 shotgun. Groundhogs and rabbits were among the first things he remembers shooting.

The woods became as comfortable to him as an old farmer’s barn, and even as a child he could always name true north as though outfitted with an internal compass, no matter how dark or deep into the woods he had traveled.

He developed a keen eye along with a stellar intuition for wildlife’s movements, earning the nickname “Spot.” He took pride in becoming a sure shot, whittling down the population of destructive groundhogs in farm fields all around his childhood stomping grounds.

When I first came to know him, my hubby was one of the most avid coon hunters I had ever met, a passion which started “as soon as he could walk,” his mother used to say.

Before he was even old enough to go to school, he would beg to go on those night hunts with his father and grandfather, often sent to bed crying his little heart out when he was told no. He has lamented watching some of the best hunting woods in the area cleared and developed, pushing wildlife out, forcing the changing of movement patterns he had grown to anticipate over a lifetime.

He speaks of the various woods he once knew as though talking about a great love of his life lost forever, and I know exactly the emotion he tries so hard to describe. The woods my sisters and I had grown to respect and enjoy was cleared in late winter when I was about to turn 11, not for development but for crop production.

It was such a sad loss, for there were no other woods like it. It had felt like Mother Nature’s home for us, with miniature meadows and coves and perfect hiding spots, including a den tree that I could slip in to without detection.

I felt certain those grand trees were as old as the dirt that grew them. In the months and years to come, I would sometimes put my little dog named Chip in my bike basket and pedal back the lane to the edge of where our woods once stood, soaking in the vastly changed landscape.

Away from all eyes, I would bury my face in my pup’s furry neck and let tears of heartbreak fall. I didn’t realize it at the time, but I was learning the steps of grieving a loss, coming to terms with how life can inexplicably change right under our feet.

“Earth and sky, woods and fields, lakes and rivers, the mountain and the sea, are excellent schoolmasters, and teach us more than we can ever learn from books.”