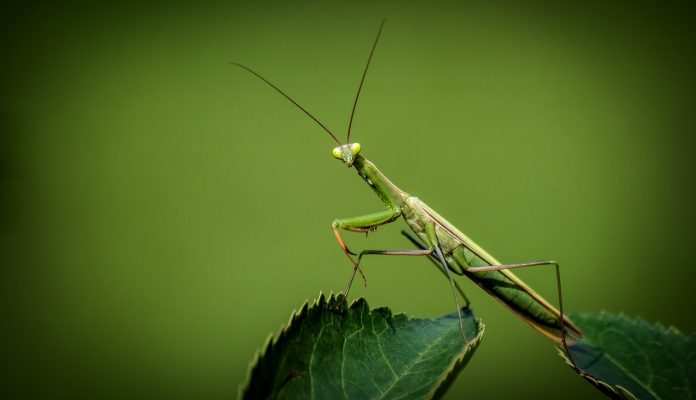 The first time I saw a praying mantis my dad explained that it ate lots of insect pests so I should never kill one. I suspect that everyone has learned that lesson as a child.

Measuring up to 4 inches long, mantises are hard to miss. And because they are such beneficial insects, they get a lot of attention.

Most of the hundreds of known species of mantises live in the tropics, but two are fairly common in the eastern U.S.

The larger Chinese mantis is more common in the upper Midwest and Northeast. This is the one most of us recognize.

The smaller Carolina mantis is found throughout the southeast and measures less than 3 inches long.

In addition to their size, mantids can be identified by their large eyes, swivel head, and greatly enlarged spiny front legs, which are folded as if in prayer.

A better name for these insects, however, is preying mantis because they use their front legs to grab and hold any unsuspecting victim that wanders by too closely.

When a mantis strikes, the movement is too fast to be perceived with the naked eye. Thanks to their size and hunting skills, mantids eat just about anything they can grab — beetles, true bugs, grasshoppers, bees, butterflies and moths.

A curious aspect of mantid breeding behavior is that immediately after mating the female usually turns her head, reaches over her shoulder, grabs the male’s head, and eats it. It’s certainly an effective way to ensure a mate’s fidelity.

I’ve always been fascinated by mantids’ ferocious predatory behavior and wondered if they ever take larger prey.

Accounts of mantids taking small birds are relatively common, and they are also known to take small tree frogs, lizards and mice.

So I was intrigued recently when I received an email alert about a paper in The Wilson Journal of Ornithology entitled Bird Predation by Praying Mantises: A Global Perspective.

It reviews 147 incidents of small birds being captured by 12 species of mantids. The reports come from 13 different countries on all continents except Antarctica.

Most reports (70 percent) came from the U.S. where mantids are often seen hunting in gardens, at nectar feeders and at hummingbird-pollinated plants.

The ruby-throated hummingbird, just like the one in your backyard, was the species most frequently victimized by mantids.

Hummingbirds were also attacked by mantids in Canada, Central America, and South America. And in Africa, Asia, Australia and Europe, researchers also found records of 29 small songbirds captured by mantids.

In the U.S. two songbirds were attacked by mantids: a northern parula warbler and a blue-headed vireo. Of all the birds captured by mantids, 78 percent were killed and eaten, two percent escaped on their own, and humans rescued 18 percent.

Most of those freed by humans were tangled in mist nets set up to capture birds at banding stations where banders are ever vigilant for such dangers.

Several reasons account for the disproportionate number of hummingbird victims coming from the U.S.

First, North America is home to many of the world’s smallest birds (hummingbirds), which can be overpowered by large mantids.

Second, the popularity of using nectar feeders and planting nectar-bearing plants to attract hummingbirds to backyards has skyrocketed over the last 30 years.

And third, large mantids released across the landscape for biological control of insect pests have become established and relatively abundant to the point that they could be considered legitimate threats to hummingbirds.

Finally, for the sake of completeness, mantids are not the only invertebrate to kill and eat hummingbirds and small songbirds. Large orb-weaving spiders also take their fair share.

Expect reports of hummingbird predation by mantids to increase in the coming years. The ease of posting photos on social media makes this almost a certainty.