I have become increasingly interested in foraging over the last few years. The more time I spend in the woods, the more I wonder how all the plants and animals benefit each other and how human beings have benefited and fit into those ecosystems as time has passed.

My latest discovery is pine needle tea. It’s a clear tea with a mild flavor that tastes refreshing and earthy.

Pine needle tea can be brewed from any pine, spruce or hemlock needles; however, using the needles of a yew or cypress tree can be poisonous. So make sure you can correctly identify the conifer you’re collecting from before ingesting teas made with its needles.

Pine needles make an aromatic tea that’s rich in vitamin C and useful in clearing sinus congestion from winter colds. Pine needles, bark and resin can also be used to make tinctures, salves and oils to treat wounds and sores.

Pines are one of the easiest conifers to identify as they have soft, long and flexible needles that grow in clusters of two to five, depending on the species.

Pines can grow up to 250 feet tall with branches that spiral around the tree. The bark is grey, thick and scaly in most species of pine trees, but a few have smooth, greenish, greyish bark. They produce pine cones that take two years to mature and then fall to the ground. Seeds within the female cones are eaten and dispersed by animals.

Pines are the most common conifer in the world because they are able to grow in a variety of locations. They’ll grow almost anywhere, including sandy soils along lakes, forested areas, old farmsteads and urban landscapes. Wild pines grow in large stands of many trees.

Pine needles can be collected at any time of the year, however, they are the most tender and aromatic in the spring, which is also the best time to collect bark and resin from pine trees to make tinctures, salves and oils.

Pine needles can be collected by plucking the needles off by hand, cutting them off with scissors or taking small cuttings from the ends of branches. Bark can be trimmed from small twigs and branches to use in your tea or to make a tincture for wound care and sore throats. Resin can be scrapped from the side of the tree and stored in a sealed container to make salves to cover scrapes, cuts and sores or to make a massage oil.

Bark, needles and resin should always be harvested with sustainability in mind. Always gather from fallen branches before harvesting from a living tree. Collect bark from twigs and branches that have been pruned at the ends. Collect needles from those branches and when collecting directly from the tree don’t harvest too heavily from one branch or area. Be careful not to damage bark on the trunk of the tree when you’re collecting resin. 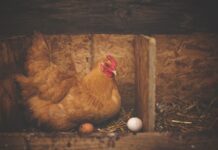 The priceless value of a fresh egg