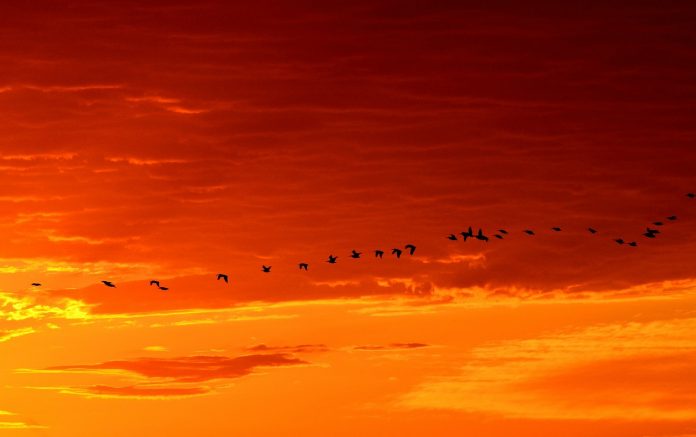 Tree leaves have begun to morph into their fall colors glory. Look for red maples, sassafras and poison ivy to lead the way.

And migratory birds have begun to head south for the winter.

Chimney swifts, for example, are familiar summer residents. They spend their days sweeping the sky for flying insects while twittering incessantly. At a glance, they resemble flying cigars.

Swifts are common in towns and cities where chimneys are seldom in short supply. They winter in the upper Amazon basin of Peru, Ecuador, Chile and Brazil.

On late summer evenings, swifts assemble and descend en masse into chimneys where they roost at night. Hundreds or even thousands may roost in abandoned industrial chimneys.

Residential chimneys may host a dozen or more.

The swifts’ descent to a roost is a behavior to behold. Sometimes a flock circles for 15 to 20 minutes before one bold soul breaks from formation and dives into the chimney. Others quickly follow.

If the flock is large, the image suggests a plume of smoke returning to the chimney.

There they perch by clinging to the vertical wall. All four toes on each foot are directed forward so they can cling tightly to rough, vertical surfaces.

Their tail feathers are tipped with stiff spines that stabilize them while roosting. But because they lack a hind toe, they cannot perch or walk as most birds do.

Another expert flyer that will soon head south is the common nighthawk.

They frequent open country, towns, and cities. I look for them at the first few Friday night high school football games of the season. High above the action on the field, nighthawks swirl around stadium lights filling their bellies with flying insects attracted to the lights.

Shortly before and after sunset, I’ve sometimes counted as many as 20 nighthawks feeding above the action on the field.

About the size of a robin with longer, narrower wings, nighthawks are kin to whip-poor-wills. A single bold white bar on each wing contrasts sharply with their charcoal body.

The wing bars are so obvious they can sometimes be seen with the naked eye.

By late August, hummingbird activity at nectar feeders has begun to slow. That’s a sure sign that migration has begun. From mid-July until mid-August a cloud of hummers drained my feeders every day.

Now I count just a few at a time. By late September most hummers will be gone, but keep one feeder up until mid-October for stragglers moving south from farther north.

Access to nectar feeders does not delay their departure. They respond to shorter day length, not food supply.

Songbirds migrate south under the cover of darkness, so observing this must be done indirectly.

Step outside after dark over the next six weeks, and listen for 15 minutes. Chances are good that you’ll hear nocturnal flight calls that help keep members of migrating flocks together. And on nights when the moon is almost full, scan it with binoculars or a spotting scope.

Watch for 15 or 20 minutes, and you will almost certainly see a few birds crossing the face of the moon. Then try it again a day or two before and after the next full moon.

Finally, monarch butterflies have also begun their southbound journey to the mountains of central Mexico. Watch for groups roosting on trees and shrubs at the end of the day.

Flying purposefully south 20 to 50 feet above the ground during the day, these magnificent insects are answering a call science is just beginning to understand.

There’s no doubt about it. Fall is in the air.