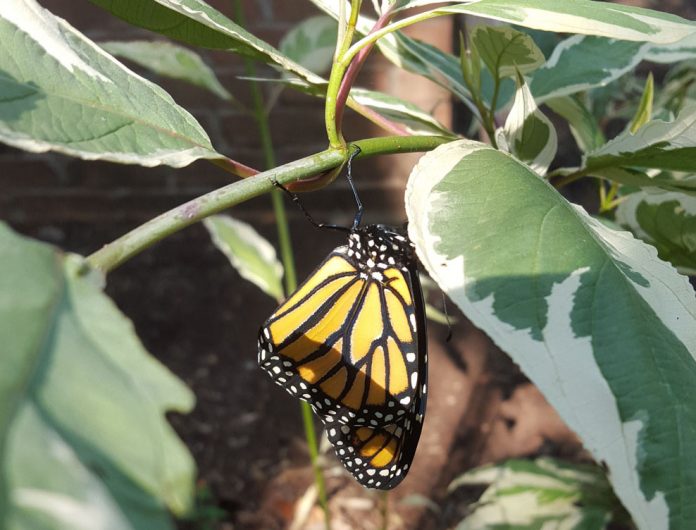 The Monarch butterfly is one of North America’s most iconic and beautiful insects. You probably remember raising the familiar black, yellow and white striped caterpillars in preschool or kindergarten. Mesmerized by their speedy metamorphosis, it’s likely you never forgot the beautiful orange and black butterflies that emerged from the tiny green chrysalises either.

At least, that was the case for me. It all seemed like magic. One week you’ve got a pudgy, brilliantly colored worm with tiny legs. A couple weeks later, pudgy becomes a slender black insect with white freckles and beautiful paper-light, orange and black wings.

When you’re five years old that’s impressive. When you have a five-year-old it’s still impressive. It’s a feat only nature could accomplish. Obviously, I wanted to share it with my daughter.

Two years ago, we found and released 10 Monarchs. Every year since we’ve gone looking for more around this time. 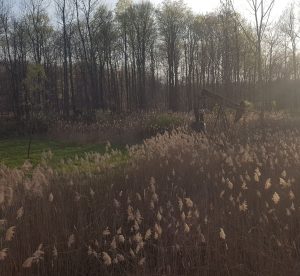 The best places to search for Monarch caterpillars are places where milkweed thrives, as Monarch caterpillars only feed on milkweed plants. Milkweed grows well in undeveloped agricultural fields, meadows and areas where vegetation has been allowed to grow on disturbed land, such as around ditches or along roads.

Female monarchs like to roost in trees during the afternoon on hot summer days. For this reason, many will lay their eggs on milkweed plants growing under trees. They will try to lay one egg per plant to provide enough food for each caterpillar once it hatches. They also tend to choose younger, healthier milkweed plants.

My parents share a driveway with an oil well that has been out of commission for some time.  My daughter and I have our best luck searching in the overgrown field that surrounds the old pump. The land is ideal for milkweed growth and surrounded by trees on all sides.

Monarch caterpillars will remain caterpillars for 10 to 14 days. During this time, they will molt five times, meaning you can find them in roughly five different sizes. Before and after each molt, caterpillars may be motionless on the side or top of their habitat as they are preparing or recovering. Be sure not to disturb them and provide plenty of food during these times.

It is possible to successfully raise a Monarch caterpillar from the smallest larval stage, but much easier in later stages. Stages one and two can be hard to see when you are searching for caterpillars, and after you’ve found a caterpillar that small you have to commit to looking after it for a lot longer.

When I’ve found larger caterpillars it sometimes only took them a couple of days to feed before their final stage of molting — building a Chrysalis. 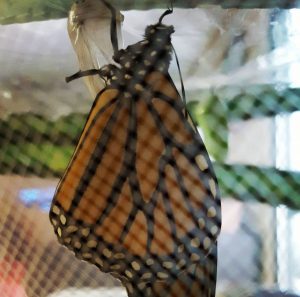 Once you’ve collected a caterpillar or caterpillars, you need to set up a habitat. The most important things to consider are ventilation, moisture and area.

Ventilation. The habitat my daughter and I use is a collapsable cylinder with a clear plastic top and mesh sides. We actually got this container out of a butterfly garden kit, but rather than sending away for caterpillars, we find our own. As opposed to keeping caterpillars in a jar or carrier, this container ensured the caterpillars were getting plenty of oxygen.

Moisture. Caterpillars hydrate themselves by eating milkweed, so it’s important to keep your cuttings fresh. However, you don’t want to put standing water in your habitat as caterpillars can drown in it. An easy solution is putting a damp paper towel at the bottom of the habitat.

Area. The general rule is one caterpillar to a jar or three to a carrier. Any more than that and it’s hard to make sure each individual caterpillar is getting the nutrients it needs.

You can also limit the spread of illness and observe each stage of their metamorphosis better with caterpillars in separate containers.

Cleaning. You want to keep your habitat clean, clearing out the frass (caterpillar poop) and changing the paper towel daily.

Milkweed. It’s always a good idea to feed the caterpillar from the plant you found it on, originally. It’s a good way to prevent bacteria exposure and it’s more likely the caterpillar will consume that type of milkweed. You want to make sure to replace your milkweed cutting daily to keep your caterpillar’s food supply fresh.

After about a week of feeding and cleaning up after your caterpillar, it will start to look very plump. You’ll notice less movement. Then it will attach itself to either the milkweed in its habitat or the very top of the container itself with a tiny silk web, and hang down in a ‘J’ shape. It’s building its chrysalis.

The pupa stage will last for nine to 14 days, but these days are easy because all you have to do is leave it undisturbed. This is another reason it’s a good idea to use more than one container for multiple caterpillars.

The first year I collected caterpillars with my daughter and put them all together, it was difficult to clean the habitat daily and add fresh milkweed because we had chrysalises hanging from the top, while younger larvae were still growing.

When the chrysalis starts to darken, and you can see the butterfly’s wings through its skin, it’s a sign the butterfly will be emerging soon. The first time I experienced this phenomenon I worried that it had died completely after all our hard work. However, after about a day and a half of waiting it emerged.

Don’t be quick to throw out a dark pupa. Some of the ones I’ve had over the years looked black to me and it was difficult to see the outline of the butterflies wings inside, but every time a beautiful and healthy Monarch emerged. Give it at least three days before assuming it’s dead. 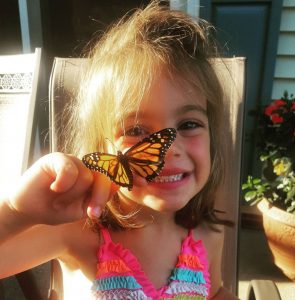 Once the butterfly completely sheds its chrysalis, it will need some time before it’s ready to be released. Its wings will take about four to five hours to dry out. In the past, I’ve let my butterflies dry out in both the habitat and outside in the shade. You can keep a butterfly in your habitat for up to 24 hours before it needs to be released to eat.

After explaining how gentle she needs to be, I’ve always let my daughter release our butterflies.